This is cross-posted to Shameless Spelling.

When I first embarked on serious orthographic study, most of what I knew pedagogically about teaching Latin and Greek word forms in English came from Marcia Henry, in what I new call the “Advanced Phonics” model of morphology and etymology. You know the one, the crumbling “Anglo-Saxon / Latin / Greek” triangle by Bob Calfee, that Marcia turned into a grid with syllable types and morphology? The one is which Latin never compounds and Greek always does? With all due respect to Elizabeth Elstob, “that Mistake is justly exploded.”

And I’ve been exploding it for more than a decade, since I learned to use better tools for orthographic analysis. For most of my years of this study, I’ve referred people to Latin and Greek Spellinars to better understand how Latin and Greek forms actually work in English, but those courses are no longer being offered. Some people recommend purchasing the videos from the films and studying them, alone or together with friends and colleagues, in order to learn from them, but that is a terrible idea. Videos are a poor substitute for a teacher. You can’t ask them any questions. Moreover, those Spellinar films were often confusing enough *with* a teacher in class explaining them, and they don’t always connect the point to a Modern English orthographic understanding on their own. And moreover moreover, now that I know that the person who made those films has an undergraduate degree in Hebrew studies, not the doctorate he pretended to have, and not a degree in Classics or even in linguistics at all, the veneer has cracked and I’m questioning the understanding he represents, more and more. The reason I just came out with a new 3.1 Supplement for my Grapheme Deck is precisely to repair a conceptual error that he put in print, which one of my very hardworking and brilliant clients have brought to my attention in the past year, and which I have confirmed with native Greek speakers and actual classicists. That 3.1 Supplement Deck is at the printer and will ship in early September, and I’ve been revisiting my understanding of Latin and Greek, testing it out, and working through it with the help of Classicist and linguist friends and colleagues.

A couple of other hardworking and brilliant clients brought me a related concern a number of months ago, but not one about the language directly. Rather, they were concerned because they noticed that people new to orthographic study who were not able to take Spelliars, because they were no longer offered, were quite poorly informed about Latin and Greek patterns. My clients underscored what they saw as a need in the broader communities of teachers, tutors, and speech paths engaged in a serious study of English spelling, and they asked me if I would consider putting together LEXinars to pick up that slack. I reached out to friends and colleagues who have credentials and experience in various combinations of Classical and Biblical Greek, Classical Latin, Modern Greek, linguistics, translation, and orthographic study, and the result of that effort was my new Classics Series LEXinars. 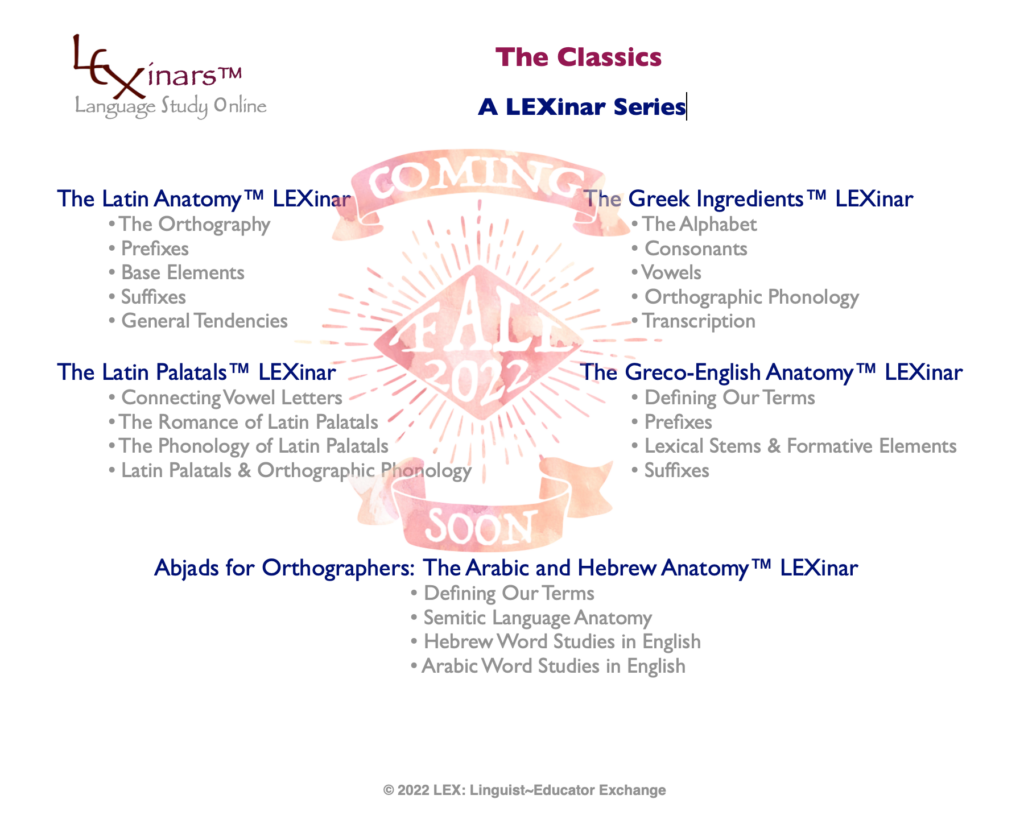 Now, I’ve always told people, “Don’t believe anything about Old English from someone who’s never actually studied Old English.” I’d say the same thing about me and Latin and Greek, so that’s why I’ve enlisted the help of people with demonstrable expertise in the subject to check my own understanding of the ancient languages’ orthographies, pronunciations, and grammar — not just poked about in Modern English — in order to develop these courses. I’m also not trying to teach you Latin or Greek, Hebrew or Arabic (which I have formally studied); I’m showing you how those languages’ legacies operate in English spelling. My own study continues, and I am unrolling the classes one at a time, seasonally.

I’ve been teaching my Latin Palatals LEXinar since 2019, and recently offered some other new materials (a study deck and posters) to support that understanding. This weekend, I’ve added four new classes into my LEX store. They are available to register for individually or as a bundle, and there are several advance-registration discount options available.

Here’s the seasonal schedule for when these LEXinars will be offered:

All five classes are discounted by $10 apiece through the end of August, PLUS if you register for more than one of them, you get an additional 5% discount at checkout. OR register for all five* LEXinars as the Classics LEXinars Package, and get all the top discounts. ALL DISCOUNTS EXPIRE AUGUST 31ST. *(If you’ve already taken Latin Palatals, there is a 4-course package option available as well).

Don’t wait! Register today and get a say in the scheduling.

Are You Still Here?