In her book, Dyslexia & Spelling: Making Sense of it All, businesswoman and linguist wannabe Kelli Sandman-Hurley fails to make sense of English phonology.

On pages 105-106, in her “glossary,” Kelly gives an inventory of 49 “phonemes” and credits the inventory to “Gail Venable and Rebecca Loveless,” but doesn’t offer any actual source for that.

The problem is that apparently, neither Gail nor Rebecca (nor apparently Kelli) understand the difference between phonemes and allophones, and that means their inventory is deeply flawed. For example, they list */gz/ as a separate phoneme than /ks/, but it’s not; those patterns are allophonic and they are driven by place value and stress. In the word execute, the <x> spells [ks], but in the word executive, it spells [gz]. See? Allophonic, stress-driven.

Moreover, if you’re going to posit a */gz/ phoneme, then you’ll also have to posit a */kʃ/ phoneme and a */gʒ/ phoneme for words like luxury, which can be pronounced with either the voiceless or voiced cluster. Then you get to anxious, in which there may not even be a velar stop at all. My Mactionary hedges its bets, as it frequently does, by offering |ˈæŋ(k)ʃəs |. Note that the vertical brackets are lexicographic, not phonological nor phonetic.

Here’s how I understand it: 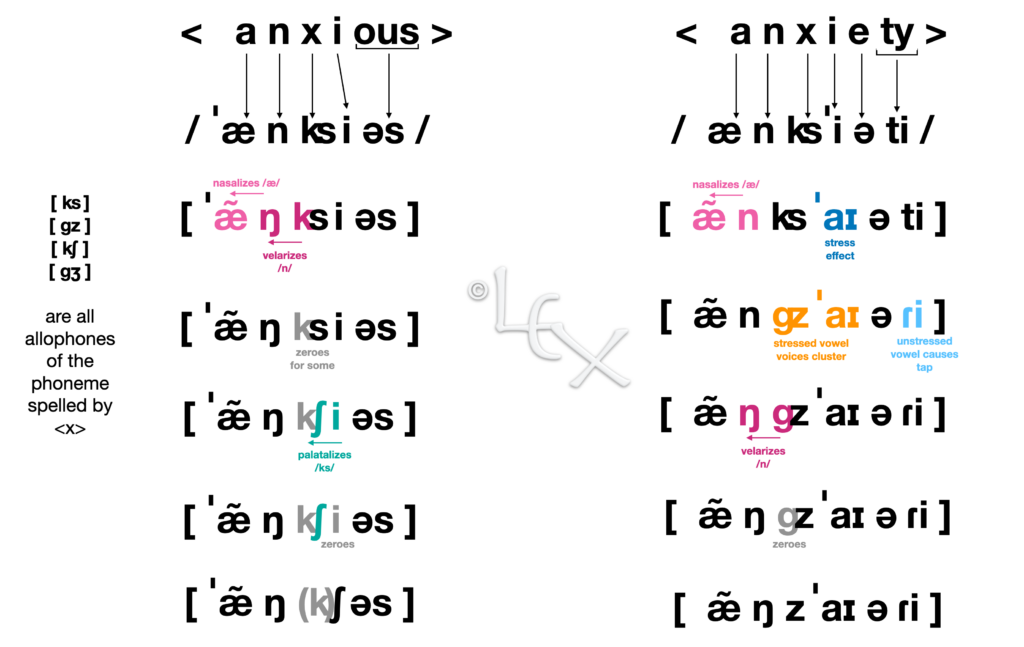 Another problem is in the list that they call “liquids.” In linguistics, a liquid is a consonant that has vocalic qualities. In English, our liquid phonemes are /l/ and /ɹ/, but Sandman-Hurley includes rhotacized vowels as “liquids.” I don’t know if this error is Kelli’s or Rebecca and Gail’s, but an error it is. Worse yet, they offer no consistency in how they represent rhotic vowels.

Across linguistics, there is considerable debate about the nature of rhotic vowels, which do not occur in all dialects of English. Rhotic vowels may be represented as a single IPA character or with the vowel and the rhoticity differentiated: Sandman-Hurley offers the following:

One problem in this analysis is the symbolology: she offers no reason why /ɝ/ is one symbol but /ɑɹ/ is two. It makes some sense to represent /ɚ/ with just the schwar, because it’s unstressed, but there’s no reason to differentiate /ɝ/ from all the other stressed forms. Note that all the other rhotic vowels are stressed. /ɔɹ/ and /ɑɹ/ are stressed; when they’re not stressed, the vowel either zeroes (as in history or boundary) or it’s rhotacized to [ɚ] as in doctor or familiar. A stressed <ar> can also sound like [ɛɹ], as in singularity. So clearly there’s more going on here than Sandman-Hurley’s facile list can offer.

Another problem is that an <ea> and an <ee> cannot spell /ɪ/, even when they spell [ɪ]. Here’s my understanding:

In irrigate, the prefix is <ir>. That <i> spells /ɪ/, because that’s a phoneme that an <i> can spell. In fear and sheer, however, the <ea> and <ee> are spelling /iː/. When a vowel rhotacizes, it becomes more lax, which is another concept that is probably beyond Sandman-Hurley, Venable, and possibly even Loveless. The phoneme is /iː/. The [ɪ] is allophonic.

Likewise with air. With bear, you can claim an /ɛ/ phoneme if you want, but an /e/ also works, as the phoneme relaxes into an [ɛ] phoneme when it rhotacizes.

On the next page, Sandman-Hurley’s chart includes */ɾ/ in little and ladder. But for the love of all that is holy, there is no /ɾ/ phoneme in English. It’s an allophone of /t/ and /d/ in North American English, and of /ɹ/ in Received Pronunciation in the UK (as in, I’m so ve[ɾ]y, ve[ɾ]y pleased to meet you). This is especially infuriating, because the whole point of understanding a flap is understanding that it’s NOT A GODDAMN PHONEME in English.

If you’re going to list allophones in your phonemic inventory, then you’d also have to list the */ʔ/ in ki[ʔ]en and the */ç/ in [ç]uman and the */æ̃/ in c[æ̃]n. In addition, all three women (Sandman-Hurley, Venable, and Loveless) are Californians, so they’re apparently ignorant of the /ɔ/ phoneme that most English speakers have in caught or law, as they don’t list it at all. They also ignore the /ʍ/ — the voiceless glide — that many English speakers have in Cool Whip or whack job.

They also list */ŋ/ as a phoneme, which is a pretty common misconception, but it’s really just a velarized allophone of /n/, which I explain in some class or other. You can tell if you study the word finger or distinguish., or, you know, if you pull your head out of your phonics ass.

This book is just one more example of people who don’t really know what a phoneme is coming up with one more bogus list. I don’t even know the point of the list.

Why does this bother me? Because my clients bring me this garbage as though it has any value and want me to help them understand it. But neither Kelli nor Gail study with me at all, and Rebecca rarely does. This means that in order for me to help my clients understand this nonsense, I have to peg it as nonsense, and then people think I’m bitchy and stuff.

I’m sick to death of explaining the baloney that other people purvey as expertise.

If you think these widely-circulated misrepresentations of one’s expertise are making you stressed or anxious, how do you think our dyslexic kiddos feel? They don’t have the luxury to wait around for the self-appointed experts to come around.

Are You Still Here?